As a violent pacifist, I sympathise with Linda, and all of us, really, we, the many pawns of the universe, all of us made from atoms billions of years old already. You’d think they would have acquired enough wisdom by now to have nothing to do with war and mayhem. Hmmph – evolution, so protonically, neutronically, electronically slow.

It’s true that it’s quite difficult to get lost on Mars. After all, Mars is only a bit more than half the size of Earth, there are no oceans to sail, and its mass (whatever that is, hahahahah) is almost 10 times less than Earth’s’s’s’s (and made of tuna – no, really!!). Getting around is a much lighter affair on Mars, too, and we all make merry lollygagging around leaping to and fro, and so on, and etcetera – you know the krill, sorry, drill. 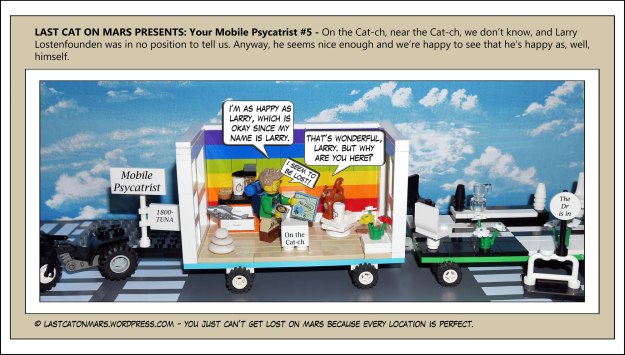 While 9 out of 10 cats prefer to stay out of the way when centaurs are stomping around (innocent tails and all that), the other 14 have no issues with them at all. In fact, felines and centaurs tend to group together to gossip about the latest social media mythological trends over lattes and ceviche at every opportunity. Prove me wrong, go on.

Psycatry has existed for as long as we’ve needed it, or since the first felis catus psycatus decided it was time to pitch in and try to save human- and other-kind from themselves. It may be a losing battle but as Dr On Mars says, If you have the tuna, I have the time. So let’s get cracking, shall we, and do a little therapeutic dance together. You never know where it may lead. (With any luck, to edible victuals).